The ‘Do It Yourself-week’ was organised by the Rietveld Academy and Sandberg Institute. It served to inform students and teachers, but also involve them with the building of an extension of the schools. Everyone could learn about the plans and the ideas of the new building, and think about the development of their own environment.  During this week, Elmo Vermijs organised the workshop ‘Waste Flows’ for the foundation year students. The goal for the students was to inventorise the different waste flows of the Rietveld Academy and to develop concepts of how this waste flow system would look like in the future. The students were divided in four themes: food, material, energy and data.  Jan Jongert, Lizanne dirkx and Jos de Krieger from Superuse Studios/ INSIDE Flows led the Energy team. Their team focused on heat and electricity waste in the building.

RESEARCH: What systems run on electricity and what could be replaced by mechanical/ analogue/ natural systems (e.g. ventilation, light).

INTERVENTION: design an intervention and  show what happens when an electrically driven system in the school replaces a natural system.

RESEARCH 1: where is heat generated or released in or outside of the building (e.g. by persons, machines) and where is heat wasted.

INTERVENTION 1: design of a new use for a heat waste flow.

RESEARCH 2: find 5 hottest and 5 coldest spaces in the buildings, measure temperature and indicate on the map.

INTERVENTION 2: assign a function to a space according to the suitability of the indoor climate.

Download the documentation of the students work here: energy_doc 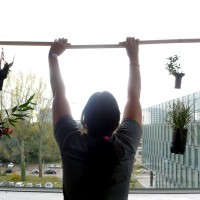