LED lamp powered by a bag of sand slowly descending

GravityLight™ is an innovative device that generates light from gravity. It takes only 3 seconds to lift the weight that powers GravityLight creating 25 minutes of light on its descent. It can be used over and over again with no running costs.

Today, over 1.5 billion people – about 21% of the world’s population – have no reliable access to mains electricity. In several countries, the grid is failing to keep pace with population growth, which mean the number of people without reliable electricity will continue to grow. These people rely instead on biomass fuels – predominantly kerosene – for light. Hazardous and polluting, there is a real need to replace kerosene with a safer, sustainable and affordable light that eliminates the many negative impacts of kerosene lights:

– Sight: Poor quality of light and fumes that cause eye infections and cataracts.

– Poverty: Fuel burns quickly and is comparatively expensive, so individuals have a never-ending high overhead burden, in many cases equivalent to 10%-20% of their income.

– Sustainability & Climate change: not only does burning kerosene deplete our finite fossil fuel resources, it also has a huge cumulative contribution to CO2 emissions: Used for 4 hours a day, a single kerosene lamp emits over 100kg of carbon dioxide into the atmosphere per year. 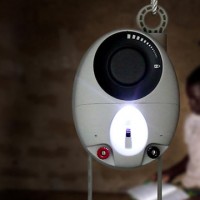