Latro is a design concept by Mike Thompson, showing the potential future of bio energy through photosynthesis of microalgae.

In 2010, scientists from Yansei and Stanford University pioneered a technique by where 30-nanometre wide gold electrodes were inserted into the photosynthesising organs – chloroplasts – of algal cells, thus managing to draw a small electrical current from algae during photosynthesis. As advances in nanotechnology lead to increasingly energy efficient products, plant life such as algae will become attractive sources for tapping energy.

Algae are incredibly easy to cultivate, requiring only sunlight, carbon dioxide (CO2) and water, offering a remarkably simple way of producing energy. Breathing into the handle of the lamp provides the algae with CO2, whilst the side spout allows the addition of water and release of oxygen. Placing the lamp outside in the daylight, the algae use sunlight to synthesize foods from CO2 and water. A light sensor monitors the light intensity, only permitting the leeching of electrons when the lux level passes the threshold – avoiding algae malnourishment. Energy is subsequently stored in a battery ready to be called upon during hours of darkness. Owners of Latro are required to treat the algae like a pet – feeding and caring for the algae rewarding them with light. (source: Mike Thompson’s website)

Biochemist Pierre Calleja, from the French biotech company Fermentalg developed a similar product, a street light, that seems to be in prototype phase. Each street lamp absorbs 1 ton of CO2 per year, more than 150-200 times more than a tree. As 25% of carbon emissions come from car exhaust, placing these sci-fi looking street lamps on roads and parking lots could have an enormous impact on CO2 emissions. Moreover, the lighting structure of the lamp operates on a battery that charges during the day by “microalgal photosynthesis”. The algae street lamp was recently tested in a parking lot in Bordeaux. (source: cleantechrepublic.net) 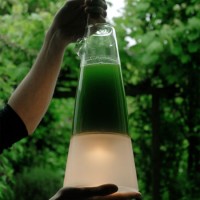