Reuse waste plastic from the oceans.

Since the discovery of the Pacific Garbage Patch in 1997, which is predicted to measure twice the size of Texas, five more have been found across the world’s oceans with the Atlantic gyre predicted to be even larger. This plastic takes thousands of years to degrade, remaining in the environment to be broken up into ever smaller fragments by ocean currents.

The gyre stretches from the coastlines of California to the shores of Japan. Recent studies have estimated 46,000 pieces of plastic per square kilometer of the world’s oceans. The number of plastic pieces in the Pacific Ocean has tripled in the last ten years and the size of the accumulation is set to double in the next ten.

Sea Chair is made entirely from plastic recovered from our oceans. Together with local fishermen, Studio Swine collects and processes the marine plastic into a stool at sea.

Studio Swine first presented the idea in collaboration with Kieren Jones at the Royal College of Art show in 2011 and have since simplified the process to build the chairs using a small factory onboard vessels. They have released a manual so others can build the chairs too.

Plastic caught in fishing nets or found washed up on the shore is sorted according to colour and chopped into small bits, then melted at 130 degrees centigrade in a DIY furnace.

Some is then squashed between two flat slabs of heavy metal or stone to create the seat, while more is scraped into a mould formed from bent scraps of aluminium.

Cooled and solidified by the sea water, the seat and three legs are then scraped with a knife to tidy the edges and screwed together to create the Sea Chair.

Ocean gyres circle large areas of stationary, calm water, into which debris drifts, and due to the region’s lack of movement, can accumulate for years. These regions are called garbage patches. The Indian Ocean, North Atlantic Ocean, and North Pacific Ocean all have significant garbage patches. The garbage patch in the North Pacific Ocean is sometimes called the Pacific trash vortex or the Great Pacific Garbage Patch. it is the largest of the big five plastic dumps.
Garbage patches are created slowly. Marine debris makes its way into the Great Pacific Garbage Patch, for instance, from currents flowing along the west coast of North America and the east coast of Asia. Some of the debris is also dumped from ocean vessels, illegally.
Garbage patches generally accumulate far from any country’s coastline, and it is nearly impossible to track the origin of marine debris. The tiny plastic particles that make up most of the patches are also very difficult and expensive to detect and remove. Few nations have accepted the responsibility of cleaning up the ocean’s garbage patches, because it is so costly. There are though a multitude of charitable enterprises all looking for a solution.

The open source design uses readily available materials and basic DIY skills to enable the the creation of a sea chair. The DIY open source concept makes people easy to participate and operate the project by themselves.

Studio Swine has created an open source design based on 'Sea Chair' by Studio Swine & Kieren Jones, accompanied by a film of the process where a chair is made on a fishing boat at sea.

The United Nations estimates some 100 million tons of plastic waste to be contaminating in the worlds oceans, a proportion of which washes up on coastlines across the globe, last year Japan had over 200 thousand tons of plastic debris wash up along it's shores. This abundance of plastic presents an opportunity where the material is delivered by the sea to coasts where it can be processed to make new products with the intention of removing the plastic from the marine environment for good.

The project produce the chair directly on the fish boat, collecting the plastic, milting, casting, assembling the chair. Whole the process is done on the sea and is simple. A direct and fast way to reuse the plastic waste.

The project seeks to bring attention to the ever-growing problem through this beautifully filmed short called "Sea Chair."
The short, directed by Dutch filmmaker Juriaan Booij, recently won second prize in the European Short Film Category at the 2014 Young Director Award during the Cannes Film Festival.
In an effort to continue their work, Studio Swine will participate in a similar project this September called Gyre to Gaia. Organized by Common Seas, the voyage will sail from the United Kingdom to the Canary Islands collecting ocean plastic and turning it into a sea kayak to raise awareness about the ocean's plastic pollution.
Studio Swine http://www.studioswine.com
creative commons 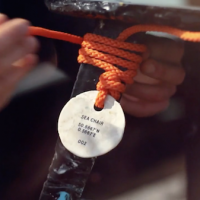