The Recycled Orchestra of Cateurla have played the miraclel instrument that was made from garbage.

-The world sends us garbage, We send back music- by Favio Chavez

The Recycled Orchestra of Cateura was founded in the slums in Paraguay’s capital Asuncion. Cateura district has been the slums of the poorest among the Latin America. It is a district becoming the hideout of an alcohol addicts and a criminal performing thieves, pickpockets, and rape(by Japan Ministry of Foreign Affairs).Children who live in this area have helped their parents from young age. Garbage picking up, car window cleaning, and begging are their main job. They are very poor and cannot even go to the school either. In this area, children are important labor force. And prospects for most of the children born in Cateura is bleak as gangs and drugs await many of them. One of the men who hurt his heart to such children, he stood up in order to provide a place where children cultivate a sense of independence education through music. And what, He was created a musical instrument to be given to children from the garbage in order to teach.

Instruments used in the orchestra made of all garbage picked up from landfills in Cateura. This area has been carried garbage of 1500 tons daily. When Favio started teaching music to children, it was very difficult to get the real instruments. Because a real violin is more expensive than a house. At one point, he wold come up to make a musical instrument from the garbage. A skilled craftsman just lived in this district. Favio has created a variety of the miraculous musical instruments with him.

Children came to be able to learn music with these musical instruments.

More than 40% of the population are the poors in Paraguay. The poorest 2500 family live in Cateura area. They live on top of the landfill coming carried garbage also 1500 tons daily.And they collected pick up such as cardboard and plastic from the garbage, they make a living by get bought to recyclers. There was also a children's appearance there. Children who cannot have future dream and hope. They cannot go to school even during the day, children had given up that they cannot get out of the slums throughout the life such as their parents.They were exert themselves to the utmost to live every day, the fight by the scramble for garbage did not die out. They are not even afford to take care of siblings, and children without the parent were often involved in a drug and a crime.

2006: Favio Chavez came to Cateura for the recycling project of garbage in Cateura. As a side, he taught music to children.

2011: He began to teach not only the music but also the making of musical instrument.

2012: The documentary film of the orchestra was planned byAlejandra Amarilla and Juliana Penaranda-Loftus. It created a global sensation as soon as a preview was shown in YouTube. And the funds of film collected by the kick starter to succeed.

2013: The documentary film was completed.

2014: The documentary film was published and the world tour of the Recycled Orchestra of Cateura was held.

When the orchestra was established at the first, they were about 30 members. But now children more than 200 have learned music. Children were able to develop the concentration, cooperativeness, and sense of responsibility through music education. And then, the wheel of music has also spread now to teach music from themselves to small children. After their video was published, performance request and donations of orchestra rushed from all over the world. Eventually They were able to get a real musical instrument. They were able to have a future dream that want to be musician and to teach music to children as Favio. However, unfortunately they have the fight of the interest by the parent of children because many donations gathered. In addition, It’s not been resolved garbage problem. Their activities will continue in the future.

Challenges that the project must overcome

Their future goal is the establishment of the ‘Landfillharmonic foundation’. They aim at the improvement of the environmental problem of Cateura, the promotion of the employment in the community. And they want to apply this methodology to the other poverty area. 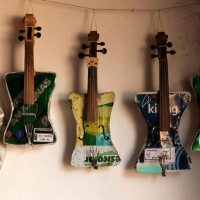