The mulberry dyke fish pond complex is a sustainable system developed by farmers in the Pearl River Delta region .

The close integration in mulberry cultivation, sericulture and fish farming is one of the models of integrated fish farming to fully exploit the production potentials of the ecosystem. This type of integration is known in China as “mulberry dike-fish pond” in the Pearl River delta and “mulberry plot-fish-pond” in the Taihu basin. The development of the integration of mulberry cultivation, silkworm rearing and fish farming has promoted the development of silk reeling and other processing industries. It is a more complete, scientifically based man-made ecosystem.

Mulberry cultivation, silkworm rearing and silk weaving have a history of about 2000 years in the Zhujiang Delta, and were initiated to produce goods for home consumption or to pay taxes. But by the early part of the Tang Dynasty (seventh century AD) these activities had already developed into a substantial industry to satisfy the trade that developed rapidly when Guangzhou was opened to international commerce,1200 years old.

It has been determined that 36 700 kg/ha of mulberry leaves can be produced which can yield 2 700 kg of cocoons and 18 400-18 750 kg of silkworm excreta and silkworm sloughs (molted skins). The silkworm excreta can both serve as feed and fertilizer for fish. The cocoons contain 80 percent pupae by weight. The feed conversion ratio of pupae to fish is 2:1 such that 2 kg of pupae can produce 1 kg of fish.

Originally, the delta was just a waterlogged area. Farmers dug and moved soil, piling it into huge rectangular or round shapes and utilized these raised embankments for planting crops. The excavated areas became deeper, making them ideal for fish culture. Where embankments are wide enough, mulberry, bamboo, etc., can be grown 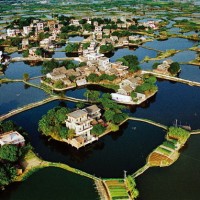