Rainwater was intended to cool the building from a re-use of the utility room as interior space.

The Minnaert building was an ambitious project to use rainwater for cooling the university building. However, due to technical failures, the cyclifying element of the project has been removed.

The only failed and decommissioned cyclifier that was investigated is the Minnaert building in Utrecht, the Netherlands. The Minnaert building transformed rainfall into cooling potential by harvesting the rainwater from the roof into a large open pond inside the building foyer. The pond was intended to be used as a thermal buffer and in the air conditioning of the large building. However, the open pond began leaking and the thermal buffer was found to be too small to cool the entire building. The technical failure was so large that the cyclifying element was abandoned. 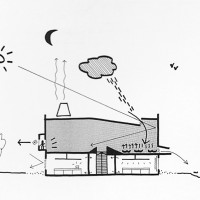