These are an example of some of the very earliest forms of ventilation, they are from Hyderabad, founded in 1768 by Ghulam Shah. They used a very simple form of ventilation, triangluar structure, almost like chimneys are on top of the homes and are used to funnel cool breezes in.

Once the most striking feature of Hyderabad was its peculiar skyline dominated by wind-catchers. These wind catchers or Manghu, as they are called in the local Sindhi language, were fixed on housetops, to catch the southwesterly breeze in the hot summer days and evenings. The breeze entering the wind-catchers would penetrate into the room and keep it cool. Due to the numerous wind catchers, Hyderabad be-came famous as manghanjoshaharuor the city of wind catchers.

IN SUMMER: the residents would open the shutter before sunset at 5:00 pm and close the shutter the next day around 11:00 am. In the summer the wind comes from the southwest so the manghface the wind direction.

IN WINTER: they do the opposite, they opened the shutter around 11am and closed it around 3pm. This meant they got the hot daylight from the sun in the south and the wind that comes from the north

The summer in the southern part of the Province Sindh in Pakistan is long and very hot. During the evening, however; there is a cool south westerly breeze from the ocean that can be felt up to 100 km inland. This cool breeze occurs during nine months out of the year and is used for cooling almost all of the buildings in Sindh. The constant wind direction makes it easy to perfectly align any wind catcher. The top is slanted to redirect the cool night air into the building interior. All wind catchers are located as high as possible so that the least amount of dust possible is introduced in the building.

Wind catchers of Hyderabad in Pakistan have at least 500 years old. In 1815, Patinger, an English tourist, has said about Hyderabad: "All the houses of the government palaces to the humble cottages, have wind catchers". This wind catcher was fixed in its position so that the pulled in the prevailing winds in the afternoon guides into any of the rooms of multi-storey buildings. Although the appears of these delicate cooling equipment look considerably different from cooling equipment in other areas, these equipment are considered as alternative solutions or replacement to meet the environmental needs of the region. Wind catcher plan of Pakistan is a shape of a square that is surrounded by two vertical sheets and its dimension is a square like wind catcher in Afghanistan. Cover on the roof is a ramp surface with an angle of 45 degrees. Wind catchers are covered with wood and plaster and metal sheets are placed on this cover in the new models. The average size of wind catcher is approximately one square meter and their height is upper than 5 meters.

The breeze entering the wind-catchers would penetrate into the room and keep it cool. Due to the numerous wind catchers, Hyderabad be-came famous as manghan jo shaharu or the city of wind catchers.

Each "mangh" (wind catcher) serves one room, in the case of single story house. And also one "mangh" for two or three rooms, in the case of typical multistory house.E.g. In the case of a two story house: they create a close well from rooftop to the ceiling of first floor. And they make window on the wall of that well to connect the room of first floor. In addition the wind catchers are situated such that their functionality is not hindered by neighbouring buildings shielding the wind.
creative commons 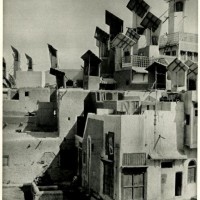 Details of the processes in the project